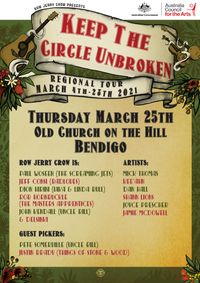 The Old Church on The Hill, 36 Russell Street, Quarry Hill

Tim Rogers, Kylie Auldist, Mick Thomas, Debra Byrne and a host of Victoria's most cherished music artists join together and hit the Victorian roads for the Keep The Circle Unbroken Tour this March.

​Keep The Circle Unbroken is a series of concerts presented across many of Victoria's iconic regional towns featuring an incredible line-up of Victorian musicians, spanning two generations and performing songs inspired by one of the most influential albums in the history of music, the Nitty Gritty Dirt Band’s 1972 album Will the Circle be Unbroken.

The roots of this concert started back in 1972 when the Nitty Gritty Dirt Band released an album that reconnected divided US generations at odds due to the perpetuating Vietnam War, hippie counter-culture and a troubling Richard Nixon presidential term. Recorded with country sensibilities, Will the Circle be Unbroken was created to bring together two generations of musicians and a divided nation and to plant the seeds of hope for a better future. It became one of the most influential albums in the history of music. Featuring collaborations with country legends such as Roy Acuff, Doc Watson and Mother Maybelle Carter, the album was pioneered by celebrated banjoist Earl Scruggs. Across 38 songs, the release captured the imagination of rock music lovers, penetrating the mainstream whilst staying true to its raw, unadulterated aesthetic.

48 years later and the album is more pertinent than ever, it’s message of unity holding strong in a world that remains largely divided. Now, some of Australia’s most prominent musicians unite in a concert performance which channels Nitty Gritty Dirt Band’s recording approach on Will the Circle be Unbroken. This live show is an audible bridge stretching across generations, cultures, sexes, politics, race, and musical genre. The circle of artists represents sitting around a campfire, being at the family dinner table, or at a traditional music session. Sharing stories, thoughts and memories handed down from generation to generation.

Following the success of the original concert performed during lockdown in 2020 to a large and enthusiastic online audience, and streamed live from St Kilda’s beloved Memo Music Hall the show will tour a swag of Victoria's regional towns across March. Performed live and in the round each show features special guest musicians and singers in never-before heard trios and duets . Well-known artists will be partnered with lesser known yet exceptionally talented younger artists and backed by the Row Jerry Crow band which is made up from some of this state's most iconic musicians.

The concert and its resultant album was the concept of Row Jerry Crow’s mandolin/songwriter Delsinki and fiddle player John Kendall. “In a world that seems to be at each other’s throats every other second, and not LISTENING to each other, we wanted to create a musical message that would inspire everybody to stop and reflect on what is important in life. Putting our heads together we thought we'd get our eclectic bunch of mates all together in one room and show the connection artistry that comes from music'. We got an incredible response” .

Ticket link here: https://www.trybooking.com/events/landing?eid=708829& The Old Church on the Hill is located on the corner of Harkness and Russell Streets, Quarry Hill, Bendigo.

The Singer/Songwriter Showcase events, staged at the Old Church by the Bendigo Blues & Roots Music Festival crew on a semi-regular basis, are an opportunity to enjoy a House Concert vibe in a public venue. The door charge is kept affordable to keep these shows accessible.

Although drinks are available for sale, the focus is on THE MUSIC. If your conversation is more important to you than other people’s enjoyment of the artists’ performance, please take it outside.

Proceeds from drink sales go to supporting the Old Church crew and their many worthy initiatives.

We look forward to your company for an intimate concert experience like you’ve likely never experienced before.