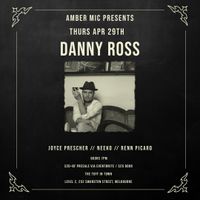 Danny Ross is a singer-songwriter based in Melbourne. His long-play release features musical collaborations with members of Husky, The Bamboos and The Cat Empire, with the productions taking six and a half years from start to finish, whilst also being a featuring artist with long time friend and producer The Immigrant. Performing along the coast at varying venues, drawing in every ear of the audience with his sound stylings.

Supporting Danny on the night are Joyce Prescher, Neeko and Renn Picard.

This is a show not to be missed! Support local music at your local venue, Toff in Town, Melbourne, complete with a cocktail bar and dining room featuring unique private carriages.