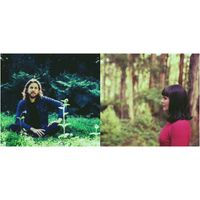 It’s been a little while since Jason Lowe paid Some Velvet Morning a visit, in fact, it’s been nearly three years since he farewelled Melbourne with a final residency there before heading North and settling in the foresty valleys of Bellingen.

On Friday 18 June he returns and re-unites with Joyce Prescher for a one-off and very special evening. The pair were introduced to each other by Mastering magician Adam Dempsey, a local genius who has touched many albums of artists here in Melbourne and beyond. They bonded over their love of seventies folk music and artists like Leonard Cohen, Bob Dylan, Neil Young and Joni Mitchell. In fact, Lowe may have a story or two about Joni, who he met whilst living in Canada.

Jason Lowe and Joyce Prescher played a hand full of shows together prior to Lowe leaving Melbourne, his beautiful lap slide weaving through her velvety vocals. At Some Velvet Morning you will have a rare chance to witness these two sharing their music on an intimate stage and hopefully join each other for a song or two.

Lowe has spent over a decade earning a name for himself among the Singer-Songwriter scene of Australia and Canada, calling the latter home for two years.

His performances are intimate, a euphoric experience to be remembered, embodying a profoundly emotional, poetic, and musical power akin to such greats as Joni Mitchell, Leonard Cohen, Bob Dylan, and Neil Young. Their influences can be felt throughout his music, as well as that of Nick Drake and Harry Manx.

Lowe has shared the stage with such luminaries as All Our Exes Live In Texas (AUS), Kim Churchill (AUS), The Wilson Pickers (AUS), Eric Bibb (USA), Jeff Martin (CAN), Jeff Lang (AUS), Dan Mangan (CAN), & Lloyd Spiegel (AUS) and has performed twice at the famed ‘East Coast Blues And Roots Festival’ Invited back for the second year by popular demand.

Joyce Prescher is a Dutch-born singer-songwriter who has certainly made her mark in the Melbourne music scene. In addition to releasing her well received debut album ’Home’ in 2017, her voice can be heard on various projects, both in Australia and overseas.

Joyce Prescher’s songs are deeply introspective, exploring hardship and distance, mortality and love. Her carefully crafted lyrics, haunting melodies and rich vocals take you back to days long gone. She delivers her words with such honesty and melancholy, you cannot help but be roped in and left mesmerised.

Joyce recently joined some of Australia’s finest musicians on a regional tour through Victoria called ‘Keep the circle unbroken’, sharing the stage with Paul Woseen (The Screaming Jets), Jeff Consi (The Badloves), Rob Hornbuckle (The Masters Apprentices), John Kendall (Uncle Bill), Delsinki, Hamish Davidson (The Davidson Brothers), Tim Rogers and Justin Brady (Things of Stone & Wood). On the tour she sang duets with Kylie Auldist, Mick Thomas, Danny Walsh, Kee’ahn and Dan Hall. She features on the same titled album, which was recorded live between lockdowns and released in 2020.

Joyce was also invited to play as part of the tribute show for the late Justin Townes Earle, which sold out in a matter of days, alongside a bunch of incredible local artists.