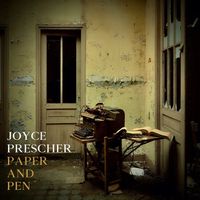 Joyce Prescher will be launching her latest single ‘Paper and Pen’ at the Thornbury Picture House on Thursday 4 August with her stellar band.

‘Paper and Pen’ is the second single Joyce Prescher releases this year, ahead of her album ‘Out of my mind’. An upbeat track that winks to the early 60s. A somewhat different sound to her single ‘Sleep Now’ released in March – yet still unmistakably Joyce with the vocal layers ever present in her music. The strong presence of percussion and electric guitar in the track make the listener want to sway their hips and provide a nice contrast to the melancholy in Joyce’s lyrics.

On the choice of venue Joyce says: “I have always been a big fan of arthouse cinema and this venue reminds me of ones I used to go to back in the Netherlands. It’s really lovely and it makes me feel quite nostalgic. Since my music very much has a cinematic aspect to it, I thought a cinema would be quite fitting too.”

Joyce Prescher is a Melbourne based folk singer/songwriter, who was born in the Netherlands. Her music would fit nicely in a 70s record collection and can be described as folk with elements of Americana. Her songs have carefully crafted lyrics, haunting melodies, beautiful fingerpicking, and rich velvety vocals – with subtle accenting reminiscent of artists like Ane Brun or even the Swedish duo First Aid Kit. Her words are delivered with honesty and melancholy; you cannot help but be roped in and left mesmerised.

Cheersquad Records & Tapes announced the signing of Joyce at the start of July, upon release of the video clip for ‘Sleep Now’. The single “Paper and pen” is the second single released by Cheersquad from her upcoming album ‘Out of My Mind’, which will be out under the label later this year.