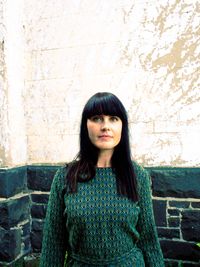 Joyce Prescher is set to release ‘Sleep Now’, the first single of her upcoming album, in April 2022. To celebrate, she will be performing live at the George Lane with a full band.

Sleep now at first glance almost sounds like a lullaby but is filled with the cinematic soundscapes and melancholy we have come to know Joyce for.

Joyce Prescher is a Melbourne based musician, who was born in the Netherlands. Her music would fit nicely in a 70s record collection and can be described as folk with elements of Americana. Her songs have carefully crafted lyrics, haunting melodies and rich velvety vocals and her words are delivered with such honesty and melancholy, you cannot help but be roped in and left mesmerised.

More recently Joyce Prescher toured as part of a show called 'Keep the Circle Unbroken' in which she sang alongside many Australian favourites, including Tim Rogers, Kylie Auldist, Mick Thomas, Debra Byrne and a stack of Victoria's most cherished music artists. Joyce features on three songs on the same-title album which was recorded live in July 2020 at the Memo Music Hall in St Kilda, between the two Melbourne lockdowns.

She also just completed a regional Victorian tour as part of Sing a Song of Sixpence.

Check out Joyce below with ‘Black On White’ thanks to Shoelace Sessions:

Special guest support for the night is the superbly talented Bec Sykes. Bec took the musical world by storm in 2020 after releasing the stunning 'Edithvale'. Check out the stunning ‘Edithvale’ below:

Bec has played a number of sold out shows around Melbourne and we look forward to welcoming her into George Lane to support Joyce on the evening.